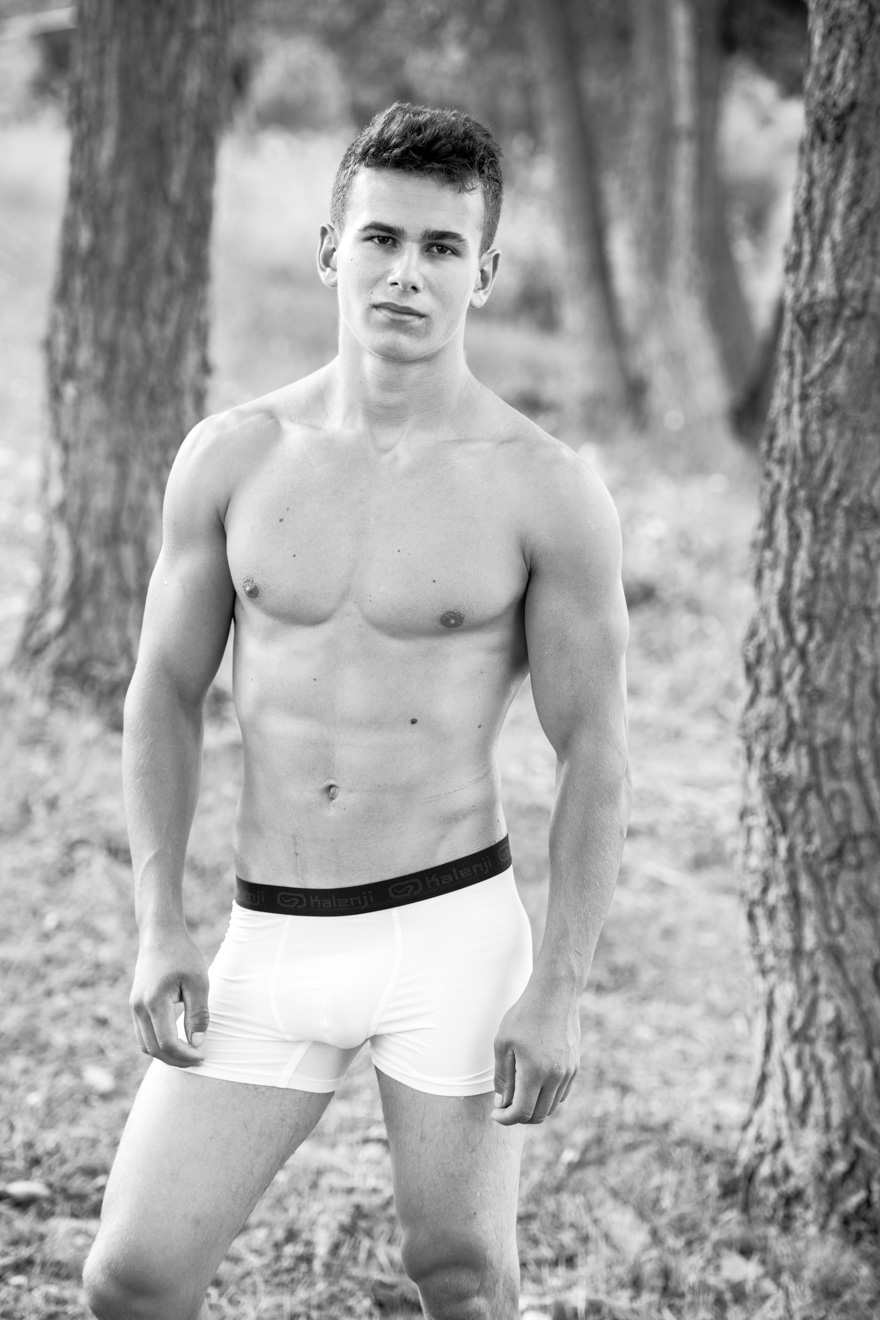 Bodytorium is a photography site dedicated to men, to flattering men and to indulging in men simply for looking the way they do and for being the way they are. It’s not about their power, their achievements, their expensive watch, sunglasses or car—it’s just about them looking great in their own skin.

Sometimes I hear women say that they “love a man in a suit”. But in my opinion, a man looks terrible and nothing like a man when he is choked up inside shirt and tie. A suit completely masks the best aspects of what makes a man amazing and turns him into a boring, featureless agent of oppression. To me, a man looks the best when he is wearing nothing but his own skin, like an athlete during the early Olympic games. Forget social norms, forget fashion. Forget those feature-eliminating dress pants, forget clothes! Just enjoy a naked man!

Let’s bring back some of the fun and positive aspects from the Classical era and from the High Renaissance—when a man’s naked body was seen (perhaps a little more than today) as a beautiful work of art. Let’s create a digital modern-day version of the statue of David.

A bit about me, the photographer and the creator of this site:

My name is Phil. I was born in Slovakia and I lived most of my life in Canada. I enjoyed my time in Canada—great friends, a good career and a nice condo with a lake view in Toronto’s Harbourfront. But for many years, I dreamed and longed for returning to Europe. I used to save all my vacation days and visit Europe as often as I could and felt very strongly that I should be living in Europe and not just visiting it.

Finally, in the summer of 2010, I made the big move. For the first couple of years of living in Europe, I was experiencing euphoria on a daily basis. I intensely admired, loved and appreciated my surroundings. The Christmas market in Vienna, the Karneval in Dusseldorf and Cologne, the business trips to Zurich and to London, skiing in the Tatras, canyoning in the  Alps, sunbathing in Croatia, the sight of the Bratislava castle from the old town at night—all these things were beautiful and amazing to me.

I am a little less “high” on living in Europe today compared to the earlier years—but I am still very happy and grateful to be living here.

The Blessing from the Punishment

A small but bizarre anecdote in my life is that when I was fifteen, (at which time I was a high-schooler in Ottawa), I was involuntarily sent to live in Slovakia for a year. It’s a long story, but the arrangement was planned in secret and done against my will.

Although I felt shocked, deceived and betrayed at first, it didn’t take long for me to fall in love with the beautiful and sincere people around me and the unexpectedly exciting teenage life in Slovakia. I must say, teenagers were a thousand times happier in Slovakia than in Canada during the nineties. It’s ironic that in “glorious and free” Canada, kids were far more self-restrained than kids in the poorer, formerly socialist and “recently freed” Slovakia. I guess people in Slovakia felt euphoric because they were just recently “let out into freedom” while Canadians felt they were always free and everything was just the “same old”.

My year in Slovakia turned out to be one of the best years in my life.  I really grew up that year like never before and I came back to Canada a much stronger, confident and happier person. Slovakia left an incredibly strong impression on me, and likely led me to eventually moving back to Slovakia.

One of the nice perks of living in Slovakia is that people here are—at least in my experience—very down-to-earth and approachable. Even the very good looking ones! There are so many naturally good-looking people here that being good-looking is the norm and it’s not a reason to feel special and to act conceited and egotistical.

I have been told many times by smiling men that “the prettiest girls are in Slovakia”. I am sure Slovak men are not the only men to feel proud of their pretty local girls, but I’ve heard this often enough that I started using my own version of the saying and occasionally mention that “the best looking guys are in Slovakia”. It always causes a surprised “wait a second” expression on people’s faces because they have never heard or dreamt of that possibility. Can you believe it’s the 21st century? Some things were better in ancient Greece. Many things were better in the pre-Christian world.

It’s the 21st century, and even in countries that are considered to be the “free world”, female beauty is still  the mightiest. According to the world, women are beautiful. Just look anywhere. We are constantly surrounded by images that reaffirm this. But men are,… well,… I don’t know what men are—because anything that appears to flatter men these days can be seen as politically incorrect. In any case, when it comes to physical appearance, there is still a big imbalance in terms of how and how much women are praised compared to men. It’s the 21st century and men are often in the spotlight as sexual predators and not as delightful and attractive beings.

Returning to the first paragraph—this site is dedicated to men, to flattering men and to indulging in men simply for looking the way they do and for being the way they are. I hope this site will at least slightly encourage women and men to take an open and sincere interest in the physical quality of men. I am starting this project off in a unique place, a place I love, surrounded by men I admire. I hope you will also enjoy my photographs.

I am starting this site as a small, private initiative—basically “out of the garage”. I photographed the first 17 models in August and September 2018 and launched Bodytorium.com in January 2019.

Most of the guys I have photographed, at least up until the fall of 2018, are friends or friends of friends from the freerunning and street workout community in Slovakia. My first worry in making a site like this was that it would be difficult to find guys who would be willing to be in nude or semi-nude photographs. Mostly I just feared asking them the question. I tried to soften things by claiming “it will be like the ESPN Body Issue”.  To my pleasant surprise, most of the guys I approached were supportive. Some even referred their friends.

Photographing men’s bodies is still a sensitive topic in the 21st century and I might never get completely used to asking guys if they are willing to strip for art. On one hand, it seems like everyone is sexting and sending their naked pictures around these days. On the other hand, people are concerned about their naked pictures being let loose on the internet. Photographing male nudes takes time and it takes trust.